RMS is benefiting from recent lean manufacturing initiatives to streamline operations, which have resulted in increased capacity and decreased direct assembly labor costs, as well as the moratorium on the medical device tax. Gross profit increased 27.6% to $1,936,812, up more than $400 thousand from $1,517,859 in the comparable quarter. Gross profit margin as a percentage of net sales increased to 64.8% from 57.7% in the first quarter of 2016. Non-GAAP EBITDA increased to over $330 thousand, up from a non-GAAP EBITDA loss of $33 thousand from the comparable quarter.

In addition, effective June 24, 2016, Cyril N. Narishkin has resigned from his positions of President, Interim Chief Operating Officer and Director due to personal reasons.

"By remodeling operations, and capitalizing on growth opportunities both domestically and internationally, RMS is continuing its upward trend this year," noted Andy Sealfon, CEO of the Company. "I'd like to thank Cyril Narishkin for his service and support over the last year. We wish him continued success going forward." Mr. Sealfon added.

In addition to participating in several industry conferences/exhibitions over the past 6 months, RMS is excited to have hosted an International Distributor Meeting. The meeting, held in Europe, provided a forum and network for representatives from European countries to speak face-to-face about the infusion market as it stands now, developments on the horizon and positioning of RMS products within those markets. "By actively listening to distributor feedback and selectively investing in new innovations for delivery systems, I am confident that RMS will continue to be a leader in the industry," commented Mr. Sealfon.

This press release includes non-GAAP financial measures that are not in accordance with, nor an alternate to, generally accepted accounting principles and may be different from non-GAAP measures used by other companies. In addition, these non-GAAP measures are not based on any comprehensive set of accounting rules or principles.

The Company manufactures medical products used for infusions and suctioning. The Infusion product portfolio currently includes the FREEDOM60® and our latest FreedomEdge™ Syringe Infusion Pumps, RMS Precision Flow Rate Tubing™ and RMS HIgH-Flo™ Subcutaneous Safety Needle Sets. These devices are used for infusions administered in professional healthcare settings as well as at home. The Company's RES-Q-VAC line of medical suctioning products is used by emergency medical service providers in addition to a variety of other healthcare providers.

This press release includes "forward-looking statements" within the meaning of Section 27A of the Securities Act of 1933, as amended, and Section 21E of the Securities Exchange Act of 1934, as amended. In addition to statements which explicitly describe such risks and uncertainties, readers are urged to consider statements labeled with the terms "believes," "belief," "expects," "intends," "anticipates," "will," or "plans" to be uncertain and forward looking. The forward-looking statements contained herein are also subject generally to other risks and uncertainties that are described from time to time in the Company's reports and registration statements filed with the Securities and Exchange Commission. 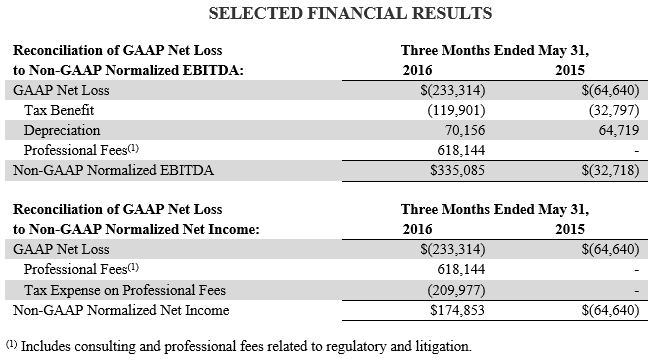